Secure and preserve for the use of the people as much as possible…of water and mountain views and of woodlands.

– John Charles Olmsted – regarding the landscape of Fort Lawton 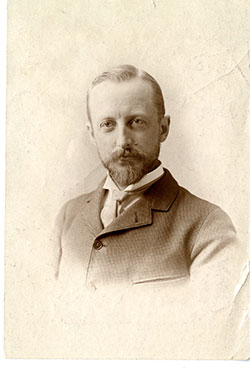 Fort Lawton, now Discovery Park, anchors John Charles Olmsted’s 1903 design for Seattle’s park and boulevard system as “a continuous pleasure drive from the north end of Bailey Peninsula to Fort Lawton Reservation, about twenty miles long.” Olmsted later drew plans in 1910 for trails and drives within the fort to maximize access to the site’s outstanding water views, beaches and forests.

Obtaining public access to the Fort was important as Olmsted had urged the Park Commissioners to “secure and preserve for the use of the people as much as possible…of water and mountain views and of woodlands,” The hope had been that the U.S. Army would grant public access to at least some of the site based on Olmsted’s plan, but there were insufficient federal funding available at the time to consider such an option.

Fortunately, as the military base was decommissioned starting in 1973, the land has returned to the City. Now Discovery Park substantially fulfills Olmsted’s vision as the system anchor.

Visit the Friends of Seattle’s Olmsted Parks website for more information on Olmstead’s influence on Seattle. 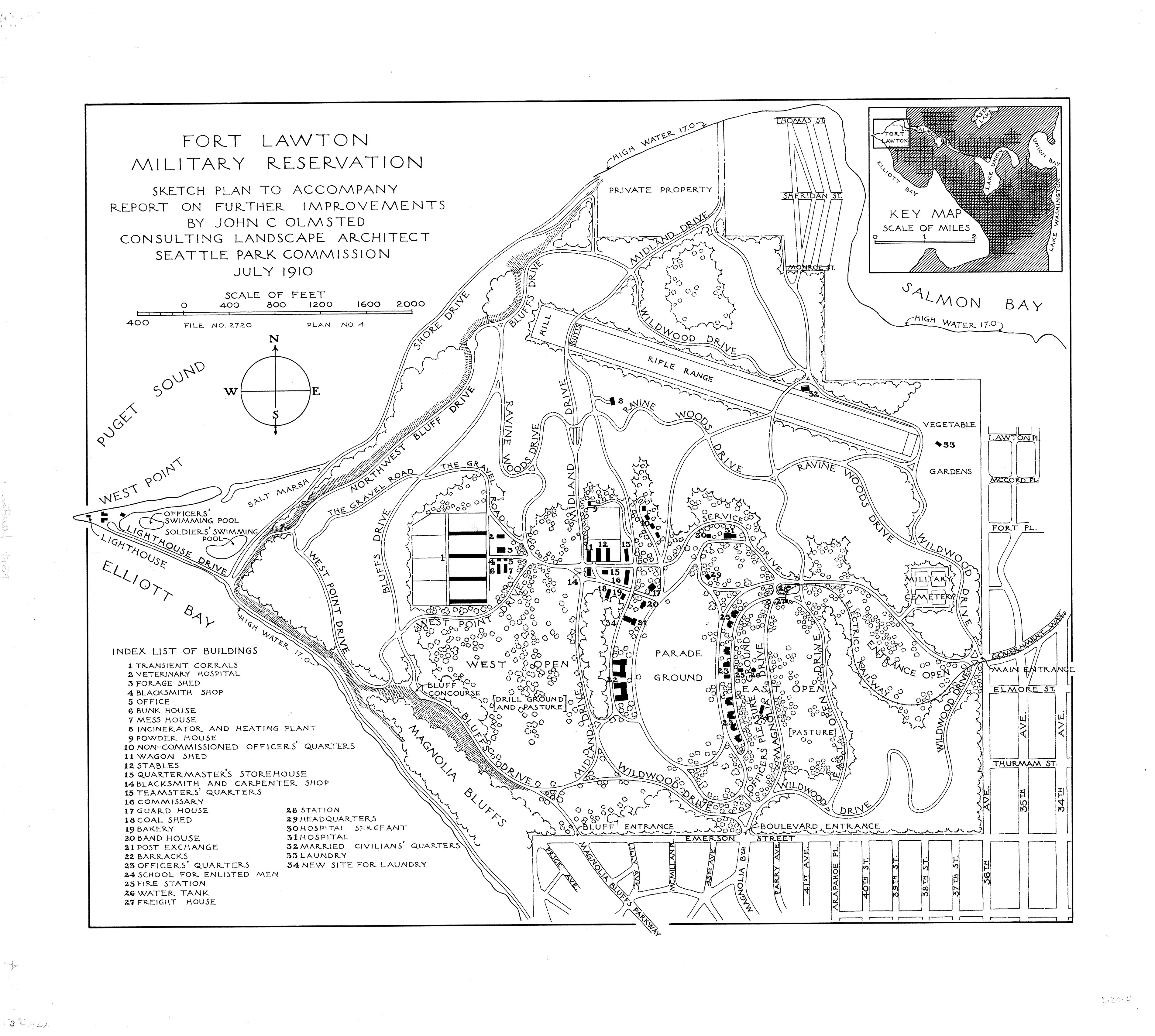 As early as 1903 the Olmsted Brothers proposed that Fort Lawton could become an integral part of the city’s open space and park system. The Olmsted brothers inherited the nation’s first landscape architecture firm from their father, Frederick Olmsted, designer of New York’s Central Park. They were hired in by the Seattle City Council to survey and develop a park plan for Seattle. At this time in Seattle’s history, money from the Klondike Gold Rush had made Seattle a wealthy city, and residents were ready to acquire more land and develop their city with a beautiful and elaborate park systems. Senior partner John Charles Olmsted was most responsible for the plans of Seattle’s Parks. John C. Olmsted and his assistant Percy Jones set out to survey Seattle on April 30th, 1903. They traveled all over Seattle, by horse, boat, trolley, and foot. They sent their formal report to Seattle in July.

The survey resulted in a comprehensive system of parks and parkways conceptually located not more than a mile and a half away from any home within Seattle. The masterplan linked large parks with smaller parks and boulevards over 20 continuous miles. The greenbelt rose from the shores of Lake Washington to the University of Washington campus, stretched down Ravenna Park and continued on to Greenlake and Woodland Park. From there the proposed greenspaces rounded Queen Anne hill and moved through Interbay towards Magnolia Bluff, concluding at Fort Lawton. There were various other linkages throughout Seattle, some stemming from Volunteer Park and others from Lake Washington. Olmsted realized the opportunity within the changing real estate market for the city to swiftly capitalize on available land as quickly as possible, especially land in close proximity to water. He wrote, “primary aim should be to secure and preserve for the use of the people as much as possible of these advantages of water and mountain views and of woodlands, well distributed and conveniently located.” On November 16, 1903, the plan was approved by City Council.

By 1970’s the population of Seattle had more than doubled what it was during 1910. There were new wants, needs, and pressures on the land of Seattle, as anticipated by John C. Olmsted. During this time Landscape architect Dan Kiley, with the help of Peter Ker Walker, were hired to create a policy document to be used in the decision making for the immediate and long-term development of the park. The first draft of the policy document was completed in 1972, then revisions were made in 1974 and 1986. The plan is incredibly thoughtful and passionate. It pleads for the seemingly infinite well-being of the park, that the park be developed with deliberation, to beautify the approaches to the park, not to add any more roads within the park, the Wastewater Treatment plant should not be expanded any more than it already is, the removal of many buildings that are inappropriate to the park, and much more.

Read more about how Daniel Urban Kiley and Peter Ker Walker, building upon the foundations of the earlier Olmsted Brothers design, created a modern and naturalistic landscape that re-introduced native forests and meadows to create a tranquil greenspace within an urban setting.