The author is a member of the Human Interaction with Nature and Technological Systems (HINTS) Lab at the University of Washington, where she recently graduated with an M.S. in Environmental and Forest Sciences. Her research focuses on understanding how human interaction with relatively wild nature can promote more mindfulness, cooperation and care within communities despite ever-increasing demand for development. She hopes her research will inform policy decisions surrounding the management and development of our natural landscape and advance equitable access to relatively wild areas.

Human interaction with nature has become increasingly important for our physical health and mental well-being, yet development continues to put pressures on natural areas within urban boundaries to satisfy the urgent needs of our growing population. While some see the value of keeping natural areas undeveloped, others see such open green space as underutilized and believe that its development could bring greater benefits to the community. 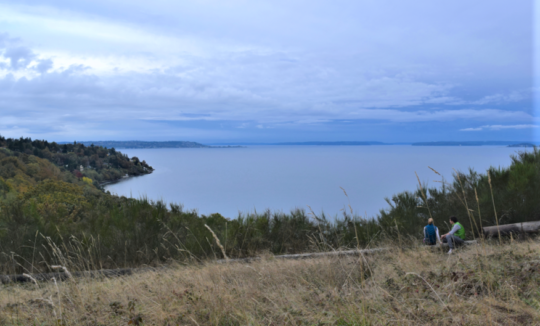 To address this issue, my research team focused on Discovery Park, land threatened by urban development since its inception. To characterize the ways in which people currently benefit from the park, we asked hundreds of study participants to describe a meaningful interaction they had with nature in the park. We analyzed our data using an “Interaction Pattern” approach, which essentially provides language for the many meaningful, diverse and developmentally significant ways in which people interact with nature.

Our results carry an important message. Not only did we find that participants’ most meaningful human-nature interactions centered on encountering wildlife, walking through open space, and finding views, we also found that 92% of those most meaningful interactions depended on what we call Discovery Park’s “relative wildness.” Our data shows that Discovery Park is unique because of its large open space, its varied and relatively unmanaged landscapes (forests, meadows and shoreline), its high levels of biodiversity, its expansive vistas, its “big nature” (like large trees) and the tranquility its relative wildness provides.

In line with our findings, Discovery Park’s Master Plan calls for the land to be “a sanctuary where [people] might escape the turmoil of the city and enjoy the rejuvenation which quiet and solitude and an intimate contact with nature can bring.” Interestingly, the Master Plan aptly predicted that there would be clashes between the park’s designated purpose and growing pressures from urban development, warning that if development were allowed within the park’s boundaries, “the park will be so fragmented that it can no longer serve its central purpose.”

This idea of fragmentation became central to our study. Some might argue that certain forms of development within Discovery Park may not detract from the Park’s large open space, as people can still walk through such developed areas. Yet our results suggest that “open space” itself is not enough to bring greater well-being to visitors of Discovery Park. Rather, it is open space in tandem with other features afforded by the Park’s relative wildness (such as biodiversity, varied landscapes, vistas, quietness and solitude) that will likely bring the greatest benefits to the community. 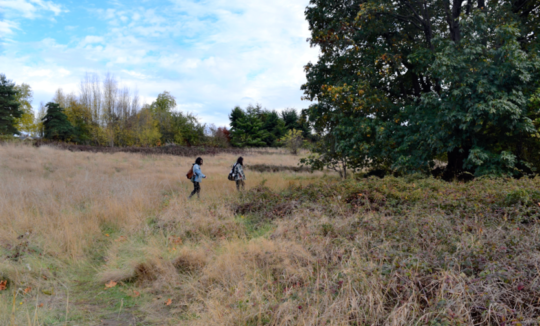 If a majority of people’s meaningful interactions with nature depend on the Park’s relative wildness, then a fragmented Discovery Park is therefore unlikely to afford the same benefits as it does now, and many of its attractive features may not withstand the ecological disruption that comes with urban development. A healthy human-nature relationship benefits both parties and can help promote more relational and mindful attitudes in our community. If nearly all of participants’ meaningful interactions with nature depended on Discovery Park’s relative wildness, then we should not only strive to maintain the collective features that constitute this unique aspect of Discovery Park, but also expand accessibility and actively encourage more people to visit and engage with its natural environment.